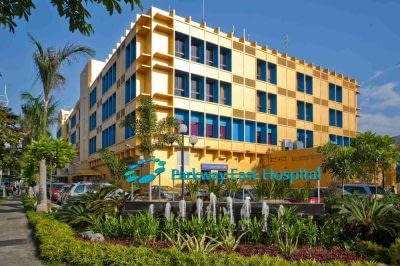 Parkway East Hospital began its operations in 1942 and was known as the Paglar Clinic and Maternity Hospital. It was founded by Dr Paglar, a Eurasian general practitioner.[2] In 1974, his descendants sold the hospital to an Englishman, Dr Leo Taylor, and it was renamed Saint Mark’s Maternity Hospital.[3]

Two years later, the hospital was sold to Hong Leong Group for residential purposes. However, the land was zoned for hospital use. Another doctor, Dr Sundarson, together with a group of businessmen and doctors bought the property from Hong Leong.[3]

The new owners refurbished and modernised the existing facilities, and renamed it Saint Mark’s Hospital. The 45-bed hospital commenced operations in 1974 with Obstetrics and Gynaecology wards. In 1977, Dr Yahya Cohen together with American Medical International (AMI) entered a joint venture with the former to form Saint Mark’s AMI Pte Ltd.[3]

Saint Mark’s Hospital further expanded with a purchase of a 40,000 sqft site adjacent to the existing building in 1982. With the expansion, the hospital’s capacity also increased to 49 beds. In 1983, AMI took over the hospital and it was renamed the American Hospital of Singapore.[3]