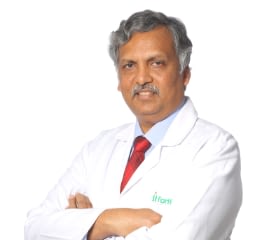 Dr. Makam did his M.B.B.S from Bangalore Medical College in 1984 and further pursued D.N.B. at St. Martha’s Hospital in 1989. He trained in Laparoscopic Surgery at Mumbai & Singapore and later started the first Video-laparoscopic Centre in Karnataka State in 1993. He has also been the Director of Bangalore Endoscopic Surgery Training Institute & Research Centre and an Advisor to the Society of Biomedical Technology. Having trained in Bariatric Surgery and obtaining Fellowships in USA and Germany, Dr. Ramesh is now actively involved in “Weight-loss” practice.

Dr. Ramesh Makam is a renowned surgeon with more than 30 years of experience in the field of MAS & Bariatric Surgery. He is one of the pioneers of Basic and Advanced Laparoscopic Surgery in the fields of GI Surgery, Gynaecology, Urology and Thoracic Surgery in Karnataka & Hand-Assisted Laparoscopic surgery for splenectomy, colectomy and donor nephrectomy in India. Having performed more than 1000 Bariatric surgeries in the last 15 years, Dr. Ramesh is one of the few surgeons who have established Bariatric and Metabolic Surgery in India. The world-renowned Bangalore Endoscopic Surgery Training Institute & Research Centre was established under Dr. Makam’s administration. He has trained over 1600 practising surgeons from 5 continents and has been involved in several innovations including BEST Endotrainer, Virtual Reality Laparoscopic Surgery Simulator, and Circulation pump, used for training in Minimally Invasive Surgery. Established the country’s first Fellowship course in the field of Bariatric and Metabolic surgery affiliated to a Rajiv Gandhi University of Health Sciences. He is also the founder member of the Hernia Society of India.

Dr. Makam Ramesh has with him an experience of over 30 years.

His key areas of interest include Bariatric and Metabolic Surgery, Basic and Advanced GI surgery and Minimally Invasive Hernia Surgery.