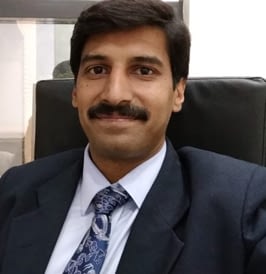 Dr. Perungo Thirumaraichelvan is a Bariatric, Metabolic and Gastrointestinal surgeon from Chennai, India. He is the Unit Head of the Chennai Division of the Asian Bariatrics hospital. Dr. Perungo Thirumaraichelvan obtained his MBBS degree in the year 2004 from the prestigious Stanley Medical college hospital in Chennai. His passion for surgery made him pursue his Master’s in the General Surgery from the famous Chengalpet Medical college hospital between 2006 and 2008. After graduation, he underwent his basic laparoscopic training at the Lifeline multi-specialty hospital – a high volume Gastrointestinal surgery center in Chennai. In the year 2013, he went on to super specialize in Surgical Gastroenterology and Advanced Laparoscopic Surgery from the renowned Madras Medical College Hospital, Chennai. Dr. Perungo mastered the technique of bariatric surgery at the Asian Bariatrics hospital under the able guidance of the doyens in the field namely Dr. Mahendra Narwaria and Dr.Sanjay Patolia. Asian Bariatrics hospital ,being one of the Asia’s largest weight loss surgery center with 20 years of experience and having performed more than 6000 successful bariatric provided Dr. Perungo an opportunity to hone his skills from the very best. Dr. Perungo has a surgical experience of more than 10 years. His bariatric surgical experience spans over 1000 successful procedures including sleeve gastrectomy, Gastric bypass, Revision bariatric surgeries and Metabolic surgery. He has pioneered and excelled in the novel Laprose bariatric surgery, commonly called as the “Weekend bariatric surgery which is a key hole, minimally invasive, pain free, short stay, tailor made, safe and fast track procedure. Ever since his Master’s program, Dr. Perungo has been an active researcher in the field of Gastrointestinal surgery. His research contributions have won him many accolades including the prestigious ‘Sundaram Best Paper’ award in the ASI state conference in 2009. He won the ‘Best e-poster’ award at the National conference IASGCON 2015. Moreover, in the ‘Torrent Young Scholar Award’ competition, he won the second and third prize at the zonal and the national level respectively. He is also an invited faculty to talk on Bariatric and Metabolic surgery at the state level and national level conferences. He is currently actively involved in performing various public awareness program including live television interviews. Dr. Perungo Thirumaraichelvan is also a Fellow of the Royal College of Surgeons, Edinburgh since the year 2011. In addition, he is a Registered Member of the General Medical Council, UK.